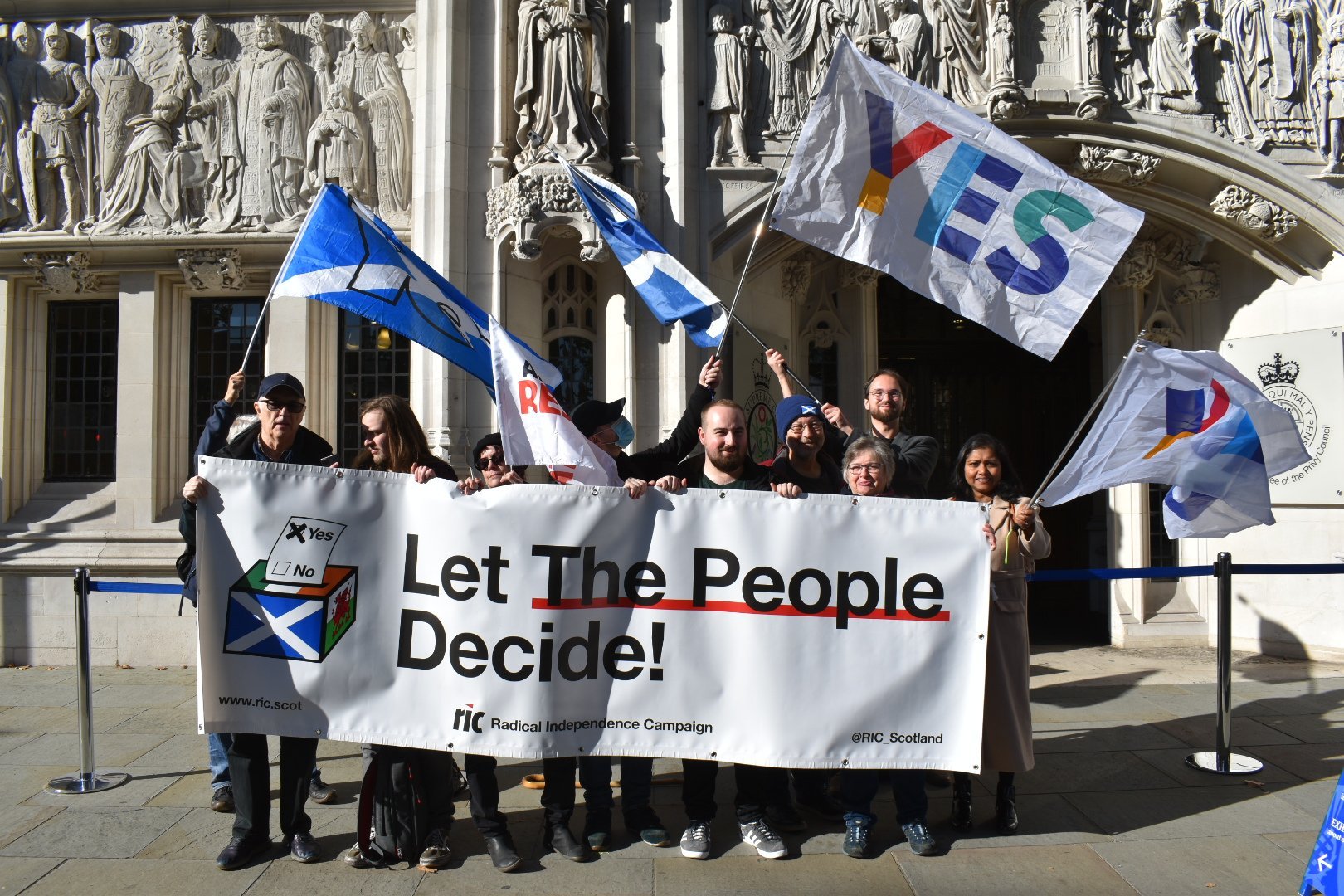 This is a dark day for democracy and signals clearly the rotten, undemocratic nature of our broken, union state.

The unelected judges of the UK Supreme Court are saying that the Scottish Parliament is permanently vassalled to Westminster and its undemocratic parliament, government and state — that the democratic rights of the Scottish people do not matter and can be ignored.

The court is saying that a parish or district council in England has the right to call a referendum on any issue, but what was claimed to be the “most powerful devolved parliament in the world” cannot.

The collaboration of both the UK government and the official opposition in thwarting democracy needs to be answered with a rising tide of protest by the Scottish people, starting at the 15 rallies called in Scotland today.

If the UK government refuses to now give the referendum a legal basis and continues to try to thwart the Parliament, we call for massive and escalating protests across Scotland against this denial of democracy.

Let the People Decide — not the judges!

The UK now has a prime minister and a head of state who are not prepared to subject themselves to a democratic vote, yet deny the people of Scotland their democratic rights.

The UK government’s refusal to countenance democracy also has a profound impact on rights not just in Scotland but across all parts of the UK state — especially for the people of Cymru/Wales and of Ireland in determining their own future.

When governments reject democracy, it is time for the people to rise up and say: enough is enough!

The UK government is not only denying democracy by the Scottish people, but for all the citizens of the UK state in refusing to put its austerity plans and wage restraint to a vote in an election.

We therefore also call for full support for the battles of the people to win decent pay awards through strike action over the coming months and call for defence of public services against all cuts.

Make the rich companies and individuals who have benefited from profiteering from the crisis pay for it, not force ordinary people to choose between eating and heating over this winter!

We call on the Scottish Government and the Westminster opposition to support such protests.

We welcome the SNP’s backing for protest rallies in Scotland this evening over the Supreme Court, but also call on them to support the massive strikes voted for by workers that are due in Scotland over the coming weeks and months and to secure the resources to pay workers the inflation-related pay award they deserve.

Furthermore, following the dreadful rolling back at COP27 of international commitments on climate change and 1.5 degrees from the Glasgow COP last year, we call for an end to all new exploration licenses for fossil fuels in the North Sea, and for massive public investment in renewables, funding for a just transition for workers and for a massive publicly-funded programme of home insulation and other reduction measures on energy instead. We support direct action to achieve these goals.

Calls for the Scottish Government to press on with a non-sanctioned referendum in light of today’s ruling are inarguably complicated by the necessary role of local authorities in organising the voting process, which could not be guaranteed in those circumstances.

Similarly, the SNP’s suggestion that the next UK general election could be used as a proxy referendum may falter in a cost of living crisis and would certainly undermine the broad, non-partisan coalition of the grassroots independence movement — as well as putting us up against the troubling introduction of voter ID for Westminster elections.

It is now time for a mass independence movement to mount the most effective challenge possible to the present Conservative UK government, not just on its undemocratic blocking of an independence referendum but also on its right-wing economic policies and their devastating impact on Scotland’s people, which need to be opposed in the here and now not just in the future.